My friend refers to me as the “Mayor of Gettysburg” since we travel to this town a handful of times each month. No joke, my wife and I were married in Gettysburg and it’s a family favorite destination anytime we’re looking for a quick getaway… which happens to be a lot.

Truth be told, the Gettysburg Blue-Gray Half Marathon has always been on my race radar, but for some reason, I could never make it work. This year when the race dates were announced I signed up immediately. When you sign up they give you an option to choose North or South, with the winning side receiving extra swag at the end of the race.

I signed up to represent the North! GO TEAM BLUE!

The day before the race we made our way to Gettysburg, it was a beautiful Spring day, the sun was shining and the weather was perfect for just walking the battlefields and taking in the sights. We arrived in town a little early, so we stopped off at our favorite restaurant The Dobbin House.

After enjoying a “Springhouse Spread” [seriously the best salad you’ll ever eat] we decided to go for a walk to kill some time before packet pickup. We visited the best in town to get excellent wine and cider, Reid’s Winery and Cider House.

A quick flight to sample the flavors!

After an early afternoon of dining and drinks [all in moderation], we picked up my packet, some extra gel packs and Nuun Rest. As a Nuun Ambassador, I’ve been meaning to pick up a tube of Rest, and it was super convenient they were being sold at the expo. I knew it was going to come in handy the night before the race, and as well as the night of the race for recovery. 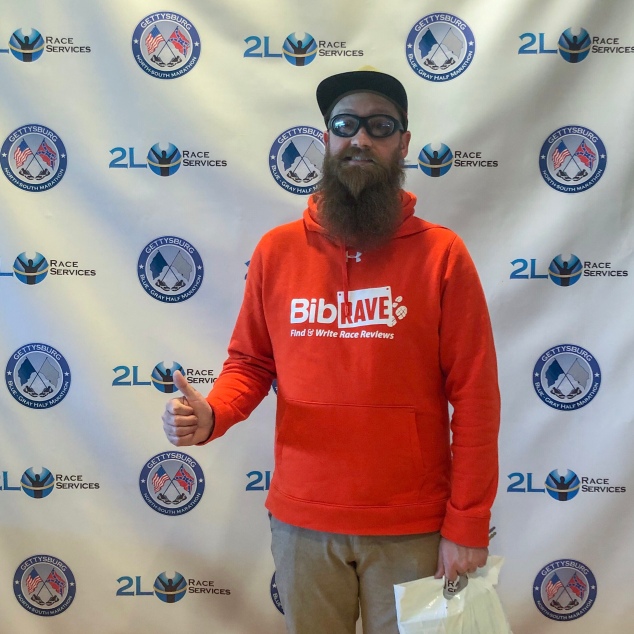 Apparently, I missed this and was super bummed out, but they were selling Gettysburg Blue-Gray Half Marathon jackets, which looked like they were really nice quality. I would have loved to have given them more of my money [and tried to reach out through Facebook after the fact], but I missed the sale cutoff. Oh well, next year?

After packet pickup, we headed over to another foodie hotspot, Food101! We all grabbed different items off the menu and as per our usual family mealtime traditions we shared our dishes. Except for my son, he’s a lone wolf when it comes to food. Haha.

Check out this awesome pizza and Cuban sandwich!

The day of the race, we woke up to cloudy skies, the weather was reported to have rained overnight and was preparing to dump on us right during the start of the race. For some reason, this didn’t bother me, and I was looking forward to running with the added air conditioning effects of spring rain.

My race kit was prepped with Aftershokz, Runderwear, BibRave Tech, Garmin, Tailwind Nutrition, Brooks Glycerin 17, and all my other race day goodies!

It must have been the hype or the adrenaline, but when I jumped out of the car and headed to the start, I neglected to grab my bib. The race was seconds away from starting, and the crowd gathered near the gate. As the starting gun went off, I realized I wasn’t wearing my bib! In a panic I called my wife, who at this point was headed back to our hotel. Lucky for me I caught her just in time for her to turn around and bring my forgotten token into the race.

I should include that I wore my AfterShokz Trekz Air headphones, and was able to make the call without even needing to unlock my phone. Super awesome!

Anyway, I ran through the starting gate about 2.5 minutes after the official start. I was a mess as I frantically wanted to find out if I was running the right race [there was a full marathon, half marathon, and 5K all scheduled]. I got a few weird looks and laughs when I questioned some of the walkers I approached, “Hey, is this a half marathon?” They must have thought I was nuts.

The Subtle Art of Making Friends

My goal was to run at an easy pace, one that would allow me to enjoy the course and just have fun. My body fell into a 9:45 min/mile pace as I effortlessly made my way through the stragglers at the back of the race. I eventually fell into a groove with a pack of runners, the 5 of us seemed to gel nicely. It’s always nice when you can run with other runners who match your level of fitness, we weren’t trying to outrun one another, we just were looking to pace ourselves. After introductions, we made small talk about the rain, which at this point I can’t recall if it was raining or not, and cracked jokes as we passed the mile markers for the marathon course. “Hey look, 16 miles, I knew we took a wrong turn!”

At one point the pack broke-up when 3 of the runner stopped to use the port-o-johns. I pressed onward with a runner who was from Fairbanks, Alaska who was running the full marathon. I’d like to think I was pacing him at our 9:45 min/mile pace as we continued the small talk. Truth be told, I need a pacer since I struggle to regulate my speed, so I appreciate his reserved approach. At mile 9 or so, he broke off to use the bathroom and I pressed onward.

I finished unofficially at 2:11:14 [per my Garmin], not my fastest pace, nor my slowest, but a pace I was able to maintain almost methodically. I noticed my pace fell apart near the end once I was running without the pack. Since I forgot my Bib in the car and hastily threw it in my jacket pocket without pinning it to the outside of my clothing, I had to manually dig through the 5,000+ race photos to find this horrible picture of my dino-trotting my way to the finish.

Since the fastest finishers were on Team Blue, we all received free Commemorative Race Glasses at the end! It was a nice touch to a fun race. One I will be running again!

Be sure to check out my Bibrave review!

One thought on “Race Recap: Gettysburg Blue-Gray Half Marathon”